This article focuses on recent changes in the financial industry in the Philippines, with the introduction of its Fintech Supervisory Sandbox and a special economic zone which encourages fintech. In addition, it explores the alignment of the regulators’ approach with digital transformation in the financial sector, also looking at how businesses can be formed using an electronic approach.

Recent years have seen an increased focus by financial institutions on transforming their services, products and reach through the use of technology, as many of the traditional approaches for driving growth have become less successful than they once were. More advanced technological capabilities and an increased appetite for rapid digital transformation have supercharged the financial sector, making it an industry with a high impact on human behaviour, in its ability to change the way customers interact with their environment.

New and more precise business models have now emerged, whereby financial institutions can make use of user insights derived from data mining and analytics capabilities. User agreements, once seen as a mere formality, can now provide additional data points that allow companies to validate not just who buys their products but also how they respond to product variations and how they can be reached in a preferred and more personalised way.

Meanwhile, developments in mobile and e-commerce technology as well as newly enabled electronic business setups allow two-sided markets where consumers can use mobile devices to launch low-cost business structures, with higher potential for viral growth than has ever been seen before. With the passing of new e-commerce laws globally and strengthened information security requirements, the increase in electronic touch points has created opportunities for financial institutions and users alike to innovate new products and services.

In this article, we explore how growth in fintech in the Philippines has allowed the country to advance more rapidly, taking into account the role of the Fintech Supervisory Sandbox.

A push for digital payments

A June 2018 speech from the late BSP (Bangko Sentral ng Pilipinas) governor Nestor A. Espenilla, Jr revealed the central bank’s recognition of the complexity of the fintech sector and the rate of change in services available across the financial industry, with a majority of fintech participants originating from within the payments sector. “As of end-2017, payments had the largest market share of the fintech landscape,” he said. “Forty-four percent of players offered innovative solutions to facilitate payments and settlement transactions.”

Geographical challenges, a lack of access to financial services in rural areas, and a sizeable population of overseas nationals present a continuous need for remittances in the Philippines, contributing to the BSP’s push for digital payment solutions, even under its new governor Benjamin Diokno, whose recognition of the increasingly digitalised financial sector landscape is reflected by his recent vow to strengthen the central bank’s ability to respond to cyber threats.

According to the World Bank’s Global Findex database, the Philippines has already made great strides to enable digital payments for the wider community. In 2014, only 20 percent of Filipinos aged 15 and over had made or received digital payments, compared to 25 percent in 2017. IDC Asia/Pacific Financial Insights estimated that business transacted through digital wallets in the Philippines in 2018 was worth over USD 700 million, a figure which it said will grow to USD 1.7 trillion by 2021.

To enhance the payments ecosystem, the BSP in November 2017 launched PESONet, the Philippines’ first Automated Clearing House (ACH) under the National Retail Payments System (NRPS), which enables batch electronic funds transfers through mobile devices, also allowing corporations to credit salaries to employees electronically without creating special payroll accounts. In April 2018, the BSP also launched InstaPay for smaller transactions by retail consumers. Both PESONet and InstaPay are real-time payment systems accessible 24/7 throughout the year, which represented significant progress for payments in the Philippines.

However, the growth of the financial services sector should not be just tied to the optics of payments. According to the Global Findex database, only 34 percent of respondents aged 15 and over have a bank account. Although this had improved from the 31 percent reported for 2014, the high portion of unbanked Filipinos indicates that challenges remain with accessing financial services.

“Ultimately, fintech innovations must work for the benefit of consumers,” Espenilla had said in his June 2018 speech. “This would include the underbanked and unbanked sectors. In this regard, digitalisation has great potential to promote inclusive growth.”

Notably, Espenilla’s speech also addressed the need for regulatory policies and standards to keep up with digital transformation in financial services, whereby risks can be identified and mitigated as needed, while also allowing room for market participants to leverage on new technologies. Supervisory sandboxes have become a regulatory standard across the world as a means for supporting innovation in the financial sector while reigning in risks associated with such new business models.

The idea behind a sandbox ecosystem is to create a bridge between financial sector innovators and regulators, with the overriding aim of projecting an air of stability and security in fintech development without causing any dramatic impact to consumers and markets. The BSP’s ‘test-and-learn’ sandbox philosophy centres on risk-based and proportionate regulation, active multi-stakeholder collaboration and consumer protection.

The BSP first used this ‘test-and-learn’ approach in 2004, to allow e-money product pilots in the market at a time when established reference models did not yet exist in other countries. The lessons learned from these pilots eventually informed the BSP’s 2009 regulatory framework for e-money, which opened up the market for non-bank players and expanded the e-money agent ecosystem.

The BSP ‘test-and-learn’ approach has since evolved into a five-step process: 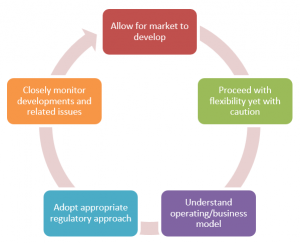 1. Determining if proposed innovations present major regulatory concerns; if not, they are allowed to proceed with development.

2. Setting limits and operating constraints for fintech firms, before they are allowed to fully market new products and services.

3. Observing and understanding operating and business models as the product or service is offered in the market.

4. Issuing appropriate regulations once a sufficient understanding of the product or service is achieved.

5. Ongoing monitoring of developments and introducing supervisory enhancements to address new risks when they emerge.

So far, some of the projects that have been tested under this approach have included a cloud based banking platform designed to drive financial inclusion, a digital currency known as ‘ePiso’ which will be rolled out this year, blockchain based payments services, and a consumer lending platform.

In practice, there is little guidance available about the specific regulatory attributes of the sandbox environment beforehand. Aspiring participants would first have to approach either the BSP or SEC (Securities and Exchange Commission) and detail the activities they wish to test in the sandbox, and then allow the regulator to observe their operations before regulations are drafted. This ‘test and learn’ approach allows the BSP flexibility to impose new restrictions on certain activities as risks become known, whereas most other sandboxes simply apply less onerous versions of existing frameworks.

Some may argue that the governing rules of the sandbox environment should be readily available to the public, for the purpose of transparency, and to ensure fintech innovators can understand the constraints they may face and manage expectations accordingly. A lack of clear guidance may disincentive innovative firms from participating and diminish some of the scalability benefits a sandbox can provide, with the neutrality of assessment being one of the key asks of such a framework. A more clear and transparent framework should lead to more firms utilising the sandbox to test innovative products and services.

That said, let us clarify that the number of ideas hitting a sandbox is not in itself an indicator of innovativeness; however, more ideas reaching the sandbox in a guided manner can lead to more effective filtering to identify promising solutions that can be further developed to serve the consumer market.

Ultimately, the consumer market is open to disruption because existing financial services are infamously considered expensive. Indeed, 38 percent of unbanked Filipinos cited the high cost of financial services as a main reason for not having a bank account, according to the World Bank’s Global Findex database.

The BSP sees technology as an enabler in its push for greater financial inclusion, where the focus is on expanding customer reach and reducing transaction costs. It sees The foundation of a digital finance ecosystem, the BSP says, is built on an efficient retail payment system, democratised access to transaction accounts, and a network of low cost touch points to facilitate transactions — enabled by financial literacy and good market conduct.

Recent policy issuances have demonstrated the BSP’s commitment supporting the ‘digital financial inclusion’ ecosystem, for example by ensuring pawnshops and money service businesses – which are recognised as having a key role in the provision of basic financial services, especially to the unbanked – are properly supervised. Additionally, banks are now allowed to use third party cash agents for distribution efficiency, virtual currency exchanges are now acknowledged as a payment option for swifter and cheaper payments, and reduced requirements and technology can now be applied for KYC of low-risk accounts.

The BSP has also made it easier for banks to expand into areas which are unbanked or underserved, by allowing the classification of banking offices as ‘branch-lite’ units. A framework has also been issued for basic deposit accounts, an affordable savings product with a low opening amount, no minimum balance and no dormancy charge. Such accounts have no reserve requirement, to incentivise banks to offer them more widely.

Meanwhile, the Philippines’ digital push is exemplified by its so-called ‘Fintech City’, a special economic zone located in Cagayan Province in Northern Luzon, which was created with a vision of housing an array of fintech firms, including startup incubators, cryptocurrency and blockchain businesses — to form a self sustaining ecosystem for innovation in financial services.

The fintech industry is key to enabling new solutions for the domestic consumer market, but it will not solely rely on the sandbox framework, or Fintech City, which is deemed ‘offshore’ and does not allow new products and services to be offered in other parts of the Philippines. Besides the array of new BSP policies aimed at enabling greater financial inclusion (as mentioned above), regulators have also been easing the process for setting up new businesses, to effectively reduce the amount of time and friction for new businesses to become operational.

Forming a company using the SEC’s company registration system (CRS) was previously semi-automated; only portions of the business registration process could be done electronically. Earlier this month, the SEC rolled out an express lane in its CRS system, allowing applicants one-day processing and approval of company registration. While the move is aimed at addressing a backlog of applications “during the transition to an automated CRS”, it will enable streamline and speed up business setups, at least for general purpose and non-specialised corporations.

The recent efforts by regulators in the Philippines and the country’s current legal frameworks are helping to enable a faster transition to a digital ecosystem in financial sector. While clarity and transparency around the sandbox requirements and greater integration of the Cagayan special economic zone with the rest of the country may serve as additional enablers for fintech, a strong foundation that encourages, supports and promotes innovation has already been built.

Further, the easing of business setup processes and other policy moves have served to demonstrate a commitment from regulators that they will continue to enhance the business environment and encourage innovation in financial services, making the Philippines an especially compelling market to watch.

Philip Keller is a financial engineering expert by training with extensive background in wealth management. He began his career at UBS AG in client advisory before transitioning to project management, and currently works in financial services as a consultant with Capco.