Market forces alone will not be sufficient for Thailand to tackle carbon emissions and achieve net-zero, says Pongnut Thanaboonchai.

During the past several years, Thailand has increasingly suffered from a series of climate-induced catastrophes – from the worst drought in 40 years, to extreme heatwaves and floods that have inundated over ten thousand households. These events brought about unthinkable misfortunes especially to the financially vulnerable. And the obvious culprit is climate change.

Thailand is among the top ten countries most prone to climate crises. By one estimate, it has lost over USD 7 billion in the past decade from extreme weather events. Yet, Thailand has consistently emitted disproportionately high greenhouse gases, or GHG. To put things into perspective, in 2020, Thailand released more CO2 than the Philippines, Singapore, and Hong Kong combined, despite having just half of their combined populations. In the same year, Thailand’s energy sector alone pumped a whopping 90 metric-tons of CO2 into the atmosphere – higher than the total emissions of Nigeria, a country with about three times Thailand’s population.

While conventional ex-post measures such as providing financial relief and temporary relocations to those impacted by extreme weather events are much needed, they do little to help avert such calamities. The solution requires tackling the root cause: GHG, the products of carbon-producing activities. Ironically, had it not been for carbon, we wouldn’t have attained the civilization we have today. Yet, it is these very byproducts that could spell the end of humanity as we know it.

This inconvenient truth has prompted the world to pledge its strongest-ever commitment to reducing GHG emissions. At COP26, nearly 200 countries finalised a deal to phase down the use of coal – the single biggest contributor of GHG. However disappointing it was for climate activists and other stakeholders that the wording of the agreement was toned down at the eleventh hour, the Glasgow Climate Pact is by far the world’s most significant climate milestone to date.

Thailand has also jumped on the carbon-neutrality bandwagon: Prime Minister Prayuth Chan-o-cha revealed at COP26 that the country’s goal is to achieve net-zero by 2065. The prolonged timeline aside, this is a welcome development. As a member of the global community, Thailand has a shared responsibility to combat climate change and help avert environmental disasters.

Still, Thailand’s policy landscape falls short of what is needed to realise its goal.

As things stand, Thailand wishes to capitalise on market forces to tackle carbon emissions. It is presumed that companies – the most significant contributors of carbon emissions – will heed the call of investors and voluntarily curb their GHG productions. In this light, authorities are encouraging companies to produce ESG reports and planning to facilitate the establishment of ESG investment funds.

For this strategy to work, mandatory requirements for clear and transparent ESG disclosures must go hand-in-hand with the ability of investors to shape a company’s direction. Alas, there is still much more work to do to align Thailand’s capital market infrastructure with investors’ interests.

Unlike in the EU, there are currently no mandatory frameworks to guide companies in producing ESG reports. Although there is a guideline published by the Stock Exchange of Thailand (SET), it is not legally binding. Moreover, the guideline adopts the “materiality test” which allows companies to cherry-pick the environmental aspects of their businesses they want to disclose. For investors, meaningful decisions necessitate the availability of clear, robust, and transparent data. Piecemeal and biased information is not adequate.

Even if we can introduce a more robust framework for ESG disclosures, shareholder concentrations among public companies are not conducive to environmental activism. This is because shareholdings in listed securities in Thailand are largely concentrated among the few, meaning that business operations are rarely swayed by the actions of activist shareholders such as ESG and impact-investing funds. For example, over 57% of publicly traded shares of Gulf, a major energy company, belongs to its founder and his affiliated companies. The same is similarly true for other energy companies including Ratch and PTT.

Moreover, corporations are profit oriented. They are predominantly judged by the ability to generate income that can translate into higher share prices and dividend payments. Granted, some companies are investing in green technology to stay relevant. But given that fossil fuels are more economical compared to other sources of energy, companies lack the sense of urgency to pivot to cleaner power sources. Relying solely on corporate goodwill may not help us actualise our 2065 net carbon neutrality goal.

Taken together, it is unlikely that market forces alone can solve the GHG problem. Government interventions are not only warranted, but urgently needed.

Currently, fossil fuels remain the most commercially viable source of energy. But as companies naturally seek to maximise their profits, the Thai government can do more to create incentives for companies to become more conscious of their carbon emissions and the need for reduction.

First, the government can consider putting in place a carbon pricing regime, which would effectively impose companies to some form of tax or cost premium on their businesses, relative to how much CO2 they emit. The pricing mechanism could incentivise companies – at least initially – to use fossil fuels more efficiently, thereby reducing carbon emissions.

Today, some 40 countries and more than 20 cities, states and provinces already use carbon pricing mechanisms, so Thailand is behind the curve in this regard.

Nevertheless, a carbon market will not by itself necessarily lead to a sustainable solution to GHG emissions. As developing nations such as Thailand expect more energy consumption from growing economic activities in the years ahead, there is a need for alternative sources of energy which, in light of the global emission goal, do not generate GHG. Therefore, carbon pricing must be coupled with initiatives to make renewable energy more accessible and reliable.

Renewable energy is still considered relatively expensive with current technology. Although the installation and equipment costs have become cheaper in recent years, it is still difficult to integrate renewable energy sources into Thailand’s energy infrastructure and achieve scale. According to Dr. Pinyo Meechumna, an associate professor at the faculty of engineering, Chulalongkorn University, a key challenge is that integration costs will rise even as the adoption of renewable sources of energy increases. [See chart below: Source link] 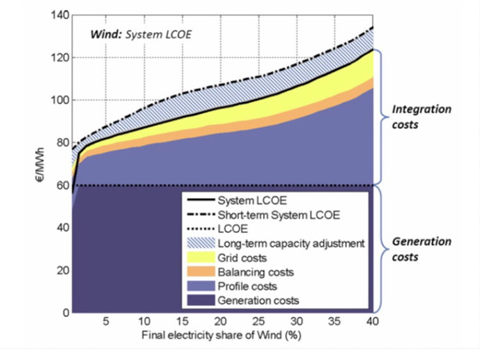 Given that the current problem largely stems from limitations and a lack of flexibility in Thailand’s current power infrastructure, there is a need to further lower the cost of renewable power through innovation. While so-called green startups around the world have been seeking to do just that, such companies in Thailand are few and far between, due to prohibitively high operating costs.

Green startups can be instrumental in introducing innovative technology into the existing energy infrastructure, however doing so requires significant upfront funding as well as time to develop and scale. Yet, investors with the risk appetite to invest in such companies (e.g. VC funds) typically prefer investment horizons that are much shorter than what is needed for a green startup to develop, scale and start generating profitability. This “maturity mismatch” makes it difficult for innovative green startups to obtain funding – thus highlighting the need for government intervention.

To promote innovative green businesses, the government should release these companies from their tax obligations until they become profitable. In addition, the government can further reduce their capital expenditures by leasing out state property to green technology companies at low or no cost. Upfront grants can also be considered, to further lower cost-related barriers and incentivise green entrepreneurs to enter the market and innovate.

Thailand’s government should also provide incentives for institutional investors to invest in green ventures, such as by making such investments tax deductible. The government could also co-invest in these companies with investors, a model being used in Singapore to promote public listings. The government may consider acting as a subordinate investor, meaning that it would absorb any initial losses first – a model used in Korea under its ‘New Deal’ initiative.

These proposals may sound unconventionally generous, and necessarily rely on taxpayer money to subsidise entrepreneurial activity. However, Thailand could minimise the fiscal burden by redirecting revenues generated from carbon pricing initiatives towards funding programmes to incentivise green energy development.

The long term effects of climate change are currently unimaginable. We must act boldly and aggressively to return to a path of environmental prosperity. We all have a shared responsibility for ensuring that the world remains inhabitable for the years to come.

Pongnut Thanaboonchai is a contributor to Regulation Asia. He is also special counsel to Thailand’s Securities and Exchange Commission, working to improve the capital markets regulatory landscape and securities laws in the country. Pongnut is a regulatory specialist on the digital economy for the World Bank Group, and was previously an associate in Banking & Finance at Baker McKenzie’s Bangkok Office.